Today this picture came my way:

Natural ‘England’ an unelected quango, are devastating the moors of West Penwith with their “Higher Level Stewardship” ‘conservation’ grazing regime. This means fencing, cattle grids and horse gates where hitherto there were open spaces and open roads. Once you add the enormous and potentially dangerous longhorn cattle into the mix, our beloved and pricelessly historic landscape, suddenly becomes a no-go area.

NE did a deal with certain farmers, who were then able to graze cattle upon the open and public spaces of the West Penwith moors. £27,000 p.a. covers them to let loose leviathan-like cattle to graze but also to intimidate. It has already been stated the cows could be deadly if with young. 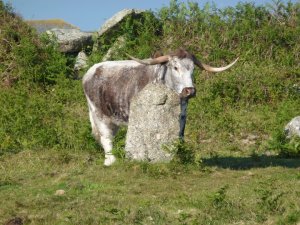 Longhorn rubs on a standing stone

NE say: “Left alone the moors will continue to scrub over, reducing both biodiversity and historic interest features while denying future generations the experience of accessing and enjoying them.”

But the NE cattle on the Penwith moors have so far discouraged walkers and riders (a drop as much as 75%), dislodged three standing stones and churned the country into a morass (along with their four-wheeled counter-parts/owners). So how does that sit with NE’s lofty assertions?

It has been a disaster from the start, with more BS being fed to the Cornish and the only winners being the farmers who graze the cattle.

Overall, having a dictatorial quango named Natural England operating in Cornwall, smacks of all that is imperialistic and abusive, as does the utterly inexusable English Heritage. Neither, for all their talk, have the least respect for Cornish heritage, history or her people.

NE are even ‘crowing’ over a successful chough season – “Natural England is delighted to have been involved with this successful species recovery project over the last ten years. We’ve worked with farmers around many miles of the Cornish coast and used Environmental Stewardship to encourage the right habitat for the choughs to feed and breed and it’s great that this work is yielding such encouraging results.”
How could we have ever managed without you NE?

So the broken men an tol in the picture at the top of the article, may or may not have been caused by NE’s cattle. It’s a long way off the beaten track for someone to go with malicious intent however.
These stones and all others have stood for millenia and but for Victorian fiddlings, have stood so since.
Is it right that cattle should destroy what is precious to so many for the sake of a smug unelected quango and the bank accounts of the few?
You and I can’t even touch Stonehenge, so why is it ok for Cornish heritage, which is as old and important to be so dismissed?

One response to “Natural ‘England’ – rapists of historic Cornish moorland”