Tory Devon Councillor tells Undercover Reporters, “I can get planning”

If it’s happening over the border in England, you can bet your ass it’s happening here in Kernow!
Dirty, self-serving scum-buckets who give not a toss for our countryside, our well-being, our infrastructure, our heritage and our childrens’ future.

‘His fees would vary “depending on the viability of the scheme, if we get it,
like if I turned a greenfield into a housing estate and I’m earning a developer
two or three million, then I ain’t doing it for peanuts… Especially if I’m the
difference between winning it and losing it.” ‘

People of Cornwall – make your vote count come the May elections.

Cornwall councillor Collin Brewer has resigned amid the furore surrounding his comment to a disabled charity.

Cornwall Councillor Thinks Disabled Children Should be “Put Down”

Colin Brewer, independent councillor for Wadebridge East – remember that name if you live in that area come the May elections- told a Disability Cornwall stand at Lys Kernow, “Disabled children cost the council too much money and should be put down.”.

An investigation ensued but he refuses to resign over the remarks which took place in October 2011. In my opinion he should be sacked, never mind resigning and also have a visit from the local Constabulary.

He wittered in his defence to Disability Cornwall: “While I meant no offence by my remarks to you I can see, in retrospect, that they were ill judged and insensitive and should not have been made at all.”

He later snivelled, “I had come to their stall after a long council meeting and I was probably a little bit het up. I used to be a salesman and I said it to provoke them into a discussion – I expected them to parry it and talk to me.”

Seemingly a ‘Class-A’ asshole and someone who most certainly, in 21st century Cornwall, should not be party to making any decsions that affect us at all.

With Mebyon Kernow talking of supporting a Cornish sporting stadium, (Used instead of the silly ‘Stadium 4 Cornwall’ or ‘S4C’ <that’s a TV channel!> or ‘Stadium for Cornwall’ which no doubt it will end up being called, just like the equally silly ‘Hall for…’. That was the campaign… Where’s the imagination?!), I though I’d throw in my view.

I feel an all-purpose sports stadium would be a fantastic asset for Cornwall so long as it’s not an excuse to build even MORE houses! The proposals for the already heavily congested Threemilestone from the last few years were exactly that – basically building a new village/town that just happened to have a stadium in it. Wrong.

My own feeling is that use should be made of already existing facilities, in fact one in particular. Carn Brea Leisure Centre and adjoining land in Pool. 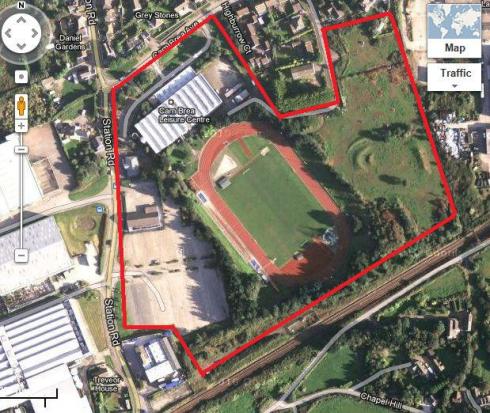 Not only is this fairly central, it’s just a couple of minutes off the A30. As you can see the main train line runs alongside – it wouldn’t take much to install a platform, indeed, the disused Carn Brea Halt is in the vicinity (even without, Camborne and Redruth stations are only 10 minutes away.).

This site would allow a stadium to be built on the site of the athletics track. An all-purpose stadium allowing athletics, football, concerts and of course our national sport, rugby. Olympic sized swimming pool, conference centres and state of the art sports science and gym facilities would be part of the whole, making this the jewel in Cornwall’s sporting crown.

That would be my dream but I’m only interested in something that would benefit Cornish folk in general and youngsters whose future careers in sport would be boosted greatly, not in lining my pockets like the carpet-baggers who either want to build unneccessary housing or supermarkets and view a Cornish stadium as an easy way in…

Even the BBC got in on this cock-up  http://tinyurl.com/c8fg6uk

Cornish/Gypsy/Traveller – all the Same According to Cornwall Council

The last few days has seen a furore over Cornwall Council’s ethnic monitoring (first spotted by one of Kernow King’s followers) on housing benefit forms:

This is a back’long episode from the with-out-a-doubt, ‘hilarious’ public schoolboy, David Mitchell’s, BBC funded ‘David Mitchell’s Soapbox’.
This series was a chance for the floppy-fringed posh boy to spout exactly what he’d been brought up to think, in a ‘funny way’!

In this episode he takes on Gaelic but within ridicules the Cornish language in the most disgusting fashion.
The uninformed buffoon’s tirade includes the idea that “campaigning to put it (Cornish) on road signs is completely lunatic”, apparently unaware that the majority of our place-names are actually Cornish!
There is a Cornwall Council policy of making English road signs bilingual – so unfortunately for Mr Mitchell and although it has nothing to do with him, it is at no extra cost to the Cornish tax-payer and these signs are only replaced as needed.

Mitchell’s drivel is smug, Victorian in thinking and at best, slightly fascistic.

Oh, those days at school when he went to Latinland to hear those Latins speaking Latin. He must remember them well…

Mitchell might do well to remember that in a time when Cornish (not English) was spoken by virtually the entire population of Cornwall, three Cornishmen were saving the English language (such as it was) from extinction. But for they, David Mitchell would be speaking Norman French and probably wouldn’t be called ‘David Mitchell’ either.

To be honest, I’ve never found this clown funny (nor, for that matter, his mine-shaft nosed counter-part) and this just confirmed my conviction.

Earlier today a motion of a vote of no confidence in Alec Robertson, the Tory leader of Cornwall Council, was carried by 63 votes to 49.

Eternal drip Mark Kaczmarek accused Lib Dem’s Jeremy Rowe of being a “back-stabber” and a bit of a fracas ensued until Chairman Pat Harvey called for security, who led Kaczmarek from the chamber!

After a disappointing and irritating Tory faff in the afternoon, it was Jim Currie (Con) and Neil Burden (Ind) who were put forward as candidates.

Several members of the cabinet, including our old friend Graeme Hicks, then resigned.

An Helghyer
Create a free website or blog at WordPress.com.