John Kirkhope is a solicitor and Notary Public who has long studied Cornish law and has been examining the very mysterious and complex Duchy of Cornwall and their latter claims of ‘private estate’.

As you may or may not have been aware, a month or two ago, a new Cornish online newspaper entitled The Cornish Gazette blasted into existence.
It is essentially a satirical paper, (along the lines of a Cornish Private Eye) however some articles also cover important news and issues the ‘local’ press are perhaps, less inclined to print.

Satire within Cornwall has long been needed. Politics and politicians on the grand stage encounter it always – in Cornwall, someone writes a letter to the West Briton and that’s the end of that. Now our elected members of parliament in the Duchy, along with their counterparts in Lys Kernow are being scrutinised and parodied for their behaviour, as well as policy. It doesn’t stop with politicians though. Anyone or any company is fair game it seems!

So within, you have the floppy-haired Andy Gorge MP as well as positive news bringer Arabella Kingston (aping the typical Tory sloane journo-type), the Week in Gibberish (tackling nonsense), a rabid old fart and any number of comedic videos.

The latest edition is out on November 30th . This was intended as a heads up more than a review but it’s starting to sound like one, so I’ll just leave you with the link!

John Angarrack on Duchy in WMN

Saturday and today saw two brilliant essays by John Angarrack on the Duchy and Cornwall’s consitutional status appear in the Western Morning News of all places! Read them here:

The Duchy is a Sovereign Land – Not a Private Company

Over the past few days, info has been coming out about Prince Charles’ meddling in Parliamentary affairs. There seems to be a lot of surprise over this.
We in Cornwall of course, have known for years how the Duke acts. It seems his cosy little arrangements with government departments are now creeping out into the fresh air.
Pandora’s Box is opening and this can only be good for the people of Cornwall.
Some links below. The last contains a letter from John Angarrack.

For more info on the constitutional status of the Duchy of Cornwall, see here: http://duchyofcornwall.eu/

The Duke, the Statue and the Money

Some weeks ago, Charles Saxe Coburg-Gotha or ‘Windsor’ as he likes to call himself, aka The Duke of Cornwall, very ‘kindly’ sent a cheque, for an undisclosed amount (£500 according to An Helghyer’s sources) to the people raising money to erect a statue in memory and honour of the countless miners who lost their lives or suffered debilitating illness from their work underground in the St Just and Pendeen districts.

Now, the good people of St Just and Pendeen have, for years, been doing all they can to raise money to have made and erect this fine statue.
It is expected to cost around £40,000 and they, through various auctions, public events etc have raised thousands towards it but are struggling to reach the target. 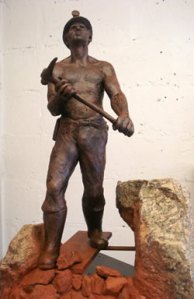 My point, is this: I find it a bit sick that the Duke of Cornwall couldn’t have coughed up the remainder in order for this statue, which was first mooted in 2000, to be made.
Since the creation of the Dukedom in 1337, the successive Dukes have made a pretty penny out of Kernow over the years, with Charles being the latest leech.
For all the Duchy of Cornwall’s contemporary talk of a ‘Private estate’, anyone with an ounce of historical knowledge knows this to be blatantly not the case. (see here for more info)

In terms of why this is relevant to mining and a miners’ statue is as follows: for a five hundred year period, ‘tribute’ or ‘coinage’ was levied against the tinners of Cornwall by the successive Dukes of Cornwall. This meant vast sums of money worked for, by Cornishmen in blood and sweat, leaving the country and going into the pockets of the gad-about Dukes to lead excessive and lavish life-styles.

It has been worked out, that in today’s money, the revenue from tribute over the five hundred year period it lasted, is around £20 billion.

Even after tribute had ceased, vast sums still poured (and still does) from Cornwall to the Duke.
Edward Albert Saxe Coburg-Gotha (Edward VII) was Duke of Cornwall from 1841 until he became King in 1901. At 19, his wealth from the Duchy stood at, in today’s terms, £60,000,000. Huge amounts of Duchy income were spent on his gambling and the debts there accrued. In 1847, whilst the Cornish men, women and children from whom the spoils were drawn, were dying in the streets from starvation, the Duke was living it up, sailing down the Nile, accompanied by an entourage of boats containing some ten thousand pints of beer, three thousand bottles of champagne and four thousand bottles of claret!

And so to today. Ol’ Charlie can only spare a donation. You’d think that out of some sort of thought for the common man, whom over the centuries has created the wealth and paid for the homes this peculiar man now enjoys, he might see his way to shelling out forty grand (a paltry sum) in order to honour some of the bravest men who ever lived (and who actually knew what a hard day’s work was!).
Alas no. After all, he’s only the head of a Private Estate, isn’t he?