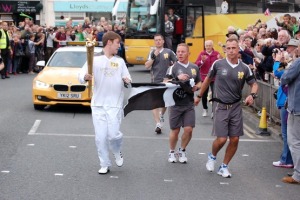 Olympic Shame but no Surprise!

We Cornish are used to assaults on our identity. It’s been happening for centuries. So it didn’t really come as much of a surprise that the Olympic Torch relay would be used as such.

In the preceding days before the relay, several Cornish campaigners were visited at their homes by the Devon police in Cornwall and warned off any protests should they be thinking of having them. In scenes reminiscent of Speilberg’s ‘Minority Report’, it now seems D&C Police have a ‘Future Crimes/Not Actually a Crime’ unit operating in this ‘democracy’!
Sgt Tom Cruise said, “We will show those pesky ‘Oo-Arrs’ a thing or two!”.

With the Olympics being a sporting event (and not a thinly veiled corporate/commercial juggernaut), lots of people in Cornwall were bewildered that Julie Kitchen – the Cornish woman ranked no.1 in the world for ladies Muaythai boxing and also a 14x world champion was overlooked to carry the torch. They were even more bewildered when a lot of the bearers didn’t even come from or live in Cornwall!

Next, is the archway at Pen an Wlas or Land’s End. A bilingual sign with the Cornish coat-of-arms and the flag of St. Piran proudly displayed. Not any more!

New paint job and no Cornish, just as the world’s media descends on Kernow! Coincidence? Apparently not. The re-painting of the sign was only part of an ongoing refurbishment programme and had nothing to do with the torch relay event the management explained. However, an ITV reporter noted the smell of fresh paint the morning of the relay…
It’s not all bad though for Kernewek: “Cornish is displayed prominently as well as other languages on another sign within the attraction” say the bucket&spadebrigade entertainers. Great, lost with a multitude of other European languages.
See what Maga: the Cornish Language Partnership had to say here: http://vimeo.com/42544690

And so to Andrew Ball: the last runner in Kernow. In Saltash and carrying the flag of Cornwall along with the torch on his journey to England. Unconfirmed reports suggest the flag was unceremoniously ripped from his hand by one of his Metropolitan stormtrooper escorts.

Apparently the flag was ‘political’ and therefore could not be carried past all the Union flags being fluttered and flown! Orders had come from above ie. LOCOG (London Organising Committee of the Olympic and Paralympic Games), who seemingly now tell the police what to do!
I wonder, will the Welsh and Scottish people be stopped from running with their flags?

As a collegue pointed out: ‘Article 14 (prohibition of discrimination) of the Human Rights Act states that:  “The enjoyment of the rights and freedoms set forth in this Convention shall be secured WITHOUT DISCRIMINATION on any ground such as sex, race, colour, LANGUAGE, religion, POLITICAL OR OTHER OPINION, ASSOCIATION WITH A NATIONAL MINORITY, property, birth or other status”.  (My emphasis).
LOCOG and its partners breached this at least twice on Saturday.’

Very early on in the day the Met were already getting fired up!

Met police getting ‘heavy’ with a local

I expect old Adolf would have approved…

On a lighter note, David Beckham kindly thanked everyone at RAF (sic) Culdrose! Nice one Dave!